Posted on June 1, 2012 by WhiteElephantInTheRoom 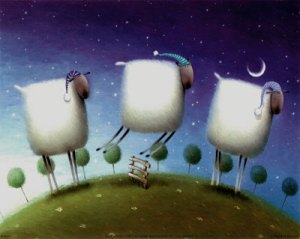 To toot my own horn, I’m an amazing sleeper. Eight hours is just half-assing it – when I’m really on my game, I get a solid nine and a half. I snooze happily through long flights, uncomfortable nights in random hotels, and even through three out of the eight Harry Potter films. I turn the world off like a switch and wake up like I’ve spent six weeks on a hammock… made of angel wings…in Barbados.

Yet lately, life has gotten a little busier, my to-do list has gotten a little longer, and my formerly sleeptastic nights have been interrupted by some unwelcome head clutter. Unsurprisingly, I don’t seem to be expending any brain power on anything of value. Instead, I experience those fervent trains of thought that start with a mental Post-It to remember to process invoices and end wondering if Stevie Nicks really knew someone named Rhiannon. Here’s a glimpse into how my head chooses to spend its should-be-sleeping hours:

1. Counting Little Blue Lights: This is my version of counting sheep. I hope that by the time my eyes meander from the clock to the phone to the DVD player to the humidifier to the Glade Plug-In to the mirror reflecting the little blue lights overtaking my kitchen, I’m exhausted by my electronic repertoire and pass right out. If not, I move on to something else of equal irrelevance.

2. Playing Six Degrees of Kevin Bacon: If being good at this game was the sole indicator of human intelligence I could dominate the world. Instead, it’s the sole indicator that my parents let me watch too much TV. Either way, I love trying to stump myself. Gerard Depardieu – go!

3. Planning My Christmas Party: Thanks to a rough Tuesday evening I already have this year’s theme nailed. Expect your save the date shortly.

4. Pondering Taxi Drivers: Why don’t they all take credit cards? Why do they always ask me how to get somewhere? Why don’t they have GPS? Why was Robert De Niro so messed up? (Side note: De Niro was in Sleepers with Kevin Bacon – one degree.)

5. Internally Singing “The Way You Make Me Feel”: I once read somewhere that “they” have determined this song to be the most common song for one to have in one’s head. Since then I can’t shake it. To my grave misfortune, the same is true for “The Lollipop Guild” from Wizard of Oz.

6. Stewing Over Expiration Dates: I’m not ashamed to admit I spend quality time weighing the potential pros and cons of drinking two-day expired milk or applying eight month old mascara or wearing three-year old sunscreen or taking a gulp of who-knows-how-old Nyquil to get my butt back to sleep.

There’s a critical moment in every sleepless night when you have to make a decision – either stick it out sheep-counting style, or call it a lost cause and get up for a night of Cocoa Puffs and infomercials. Since the latter can result in a drawer full of Pajama Jeans and a TiVo season pass to Bethenny Ever After, I recommend giving sleep a chance. But counting sheep becomes awfully boring around lamb number three hundred seventy-six, so feel free to borrow one of my inane tactics to get you back to Snoozeville.

What do you think about when you’re stuck awake at night? Or more importantly, got any Six Degrees stumpers?

I'm an 80s music lover, traveling junkie, mac & cheese connoisseur, amateur wine snob, party-planning priestess and Chicago transplant living in Southern California. I find adventure in the everyday and have a unending compulsion to write about it. Hope you enjoy reading my mind!
View all posts by WhiteElephantInTheRoom →
This entry was posted in Commentary, Health, Humor, Life, Movies, Music and tagged counting sheep, Insomnia. Bookmark the permalink.

A trekkie's nightmare with a keyboard

Welcome to Our So-Called Adulty Life

Stylish Tech, Lifestyle And Beauty News That You Can Use ::

Tech, Entertainment, and more from @MarkAbsher

Life, Jobs and the American Way.

White Elephant in the Room

random insight from an unwanted houseguest