Posted on April 23, 2012 by WhiteElephantInTheRoom 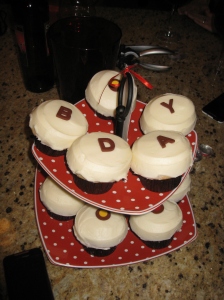 The first time I ever encountered red velvet cake was in Steel Magnolias when they serve a red velvet armadillo groom’s cake at a wedding of surprisingly un-squeamish guests. The road kill-inspired delicacy turned me off to the concept of red velvet until the early 2000s when I started noticing a surprising trend – the cupcake frenzy. The petite starlet of first grade birthday party fame was suddenly chic, suddenly talked about, and suddenly experiencing the kind of celebrity once reserved for animate objects. And the flavor most often rocking the red carpet was, apropos, red velvet. A decade later, the flavor is still so popular it’s actually infused in both vodka and wine (both currently on my shelf).

The struggles of food celebrity rival that of real celebrity, and foods have just as a hard a time staying relevant. “The other white meat” has had been campaigning for years but hasn’t yet landed its pivotal role; while food-on-a-stick has reinvented itself time and time again – it’s most talked about transformation being when it shed its fried Snickers in favor of a ball of cake. But cabbage soup, fondue, the casserole, Atomic War Heads, and anything with the word “fusion” – all of these things enjoyed a temporary spotlight only to retire to “Where Are They Now?” status.

Yet several classics that once enjoyed a modest career have experienced a successful comeback. S’mores can now be found in the trendiest restaurants served with a dash of cayenne and a personal burner, and mac and cheese has gone gourmet with additions like lobster and truffle oil. Sweet potatoes have shed their Thanksgiving side dish type-casting by taking on more challenging roles – most recently as both tater tot and gnocchi.

While food-culture phenoms argue the red velvet’s star is finally going the way of the 2009 pomegranate martini fizzle, other foods are just beginning to feel the spotlight. Thanks to amazing PR coverage and frequent buzz amongst celebrity chefs, kale is the new spinach and chocolate won’t go anywhere without sea salt. The squash family notoriety is also climbing with acorn, spaghetti and butternut taking leading roles across all meal genres.

A food’s “fifteen minutes” can last decades without incident or be unceremoniously stopped short by an unexpected newcomer (goodbye cupcake, hello cake ball). Our only role is to savor the show as long as it lasts.

What are your favorite food trends?

A trekkie's nightmare with a keyboard

Welcome to Our So-Called Adulty Life

Stylish Tech, Lifestyle And Beauty News That You Can Use ::

Tech, Entertainment, and more from @MarkAbsher

Life, Jobs and the American Way.

White Elephant in the Room

random insight from an unwanted houseguest